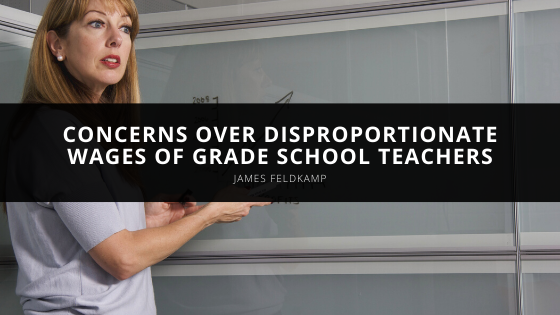 One of the most trending topics in the American public school system today is the perceived unfairness of wages that teachers must face, often driving them to take on multiple jobs just to make ends meet. James Feldkamp, who has more than 15 years of experience teaching at the university level, discusses some recent highlights below.

James Feldkamp has noticed that teachers’ salaries have been in the media a lot recently with many expressing their concerns at rallies and demonstrations. Colorado teachers have earned top spots in the news by rallying in front of political offices demanding attention from representatives.

“More and more we’re hearing horror stories of teachers living out of their cars or working multiple jobs just to afford the bare basics,” says James Feldkamp. “Many teachers have been forced to opt-in for free or reduced lunch costs for their own children in the same school districts that they teach in.”

Doug Freeman is just such an educator. He’s a fourth grade teacher at Edith Teter Elementary School in Fairplay, Colorado who grew up in the state. Unfortunately, teacher wages have forced him––among many other educators in the state––to relocate to find more affordable housing beyond their own school districts.

Colorado has proven to have one of the strongest economies in the country, but frustration is building over the state’s lack of wage competitiveness for teachers. Most of the teachers in the state are highly educated and have earned Bachelors or Masters degrees to excel at their work. Unfortunately, many of these teachers are unable to afford minimum bills, even with their higher education.

Recently, many of Colorado’s teachers gathered together at the state’s Capitol to explain their financial hardships to local lawmakers. Only two years ago, educators swarmed around the Legislature and demanded answers from legislators over the same issue, making the demonstration a recurring event each year.

“The problem keeps getting tossed around between Democrats and Republicans who have very different, very strong opinions of how the problem should be handled,” says James Feldkamp. “And while they bicker over the best path to take, more and more teachers from Colorado––and elsewhere––go on strike to show their frustration over a lack of solution.”

The Democrats have introduced a measure, called Senate Bill 89, that would create a dedicated incentive fund for teacher pay raises, which would be a first for state funds. Alternatively, Republicans have proposed a separate legislation that would reward Colorado’s highly effective teachers with bonuses of about $2,000 each. This is part of a package of education bills put forth by Republicans which would also give income tax credit to teachers for any out of pocket classroom expenses.

“We’ve come to a point where our teachers are jumping ship to prove that they can’t live like this anymore, which is a shame coming from one of the most advanced and richest countries in the world,” says James Feldkamp. “Lawmakers need to rise up and develop a solution for our teachers or else generations of students will also suffer.”